Despite its popularity, mullets weren’t for the timid. A few of the most popular mullets have been worn by hockey players like Jarom*r Jágr and Patrick Kane as well as country music stars like William Ray Cyrus and Blake Shelton. Since 80s and 90s styles have returned and barber visits have decreased, the mullet is on the rise. Don’t stop at pandemic length, give it some shape. The look has evolved to include mullets with flat tops, fades, pompadours, and hairpieces. Mullets don’t matter whether they’re short, medium, or long, as long as they run. The hair at the front stays short, while the hair at the back is long enough to cover the neck.Check out these Mullet hairstyles. The mullet cut goes well with curly hair. Because curly hair naturally bounces and contains volume, the change from side to side in length is softened. You can show off your curls in the back section while keeping your face free from distractions, by keeping your hair long. This look is perfect if you love a retro look, which is inspired by rock stars from that era as well as Hollywood stars. 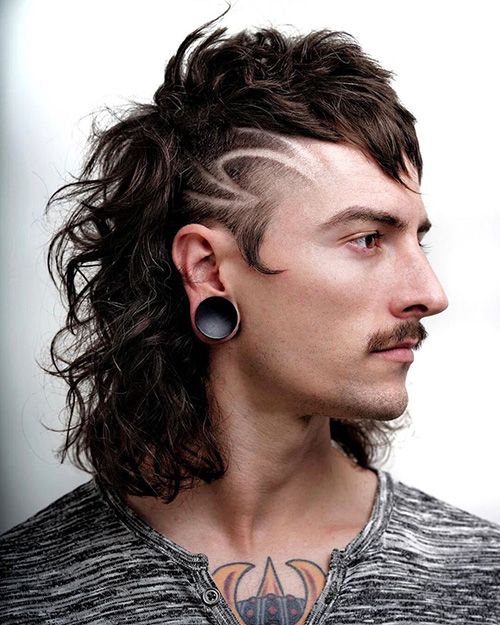 Your mullet can become an expression of your individuality by adding art. This classic go-to can create an interesting contrast between long and short hair, especially if it’s paired with a fade. Those who like to get creative with their haircut can ask their barber for more elaborate designs, such as geometric shapes, minimalist lines, something three-dimensional. 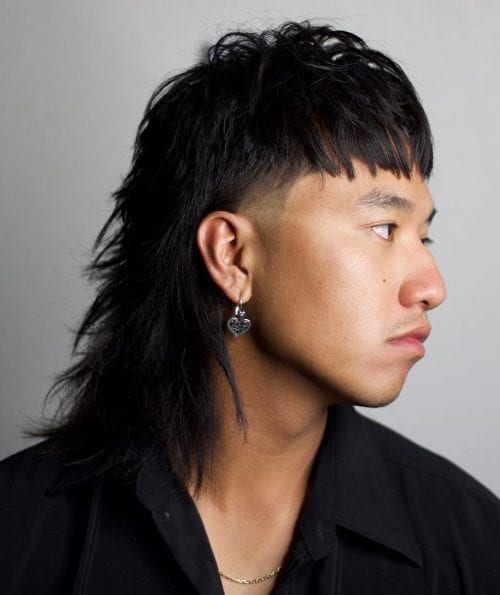 In contrast to traditional mullets where hair is generally disconnected between the top and bottom, this shaggy alternative positions multiple layers onto the face to frame the face. The style is dramatic and reminiscent of the ’70s while still maintaining a modern feel. Adapt the style in a variety of ways – achieve a fashion-forward aesthetic by sticking to a straight fringe, or showcase a traditional cut while retaining a choppy look in the back. 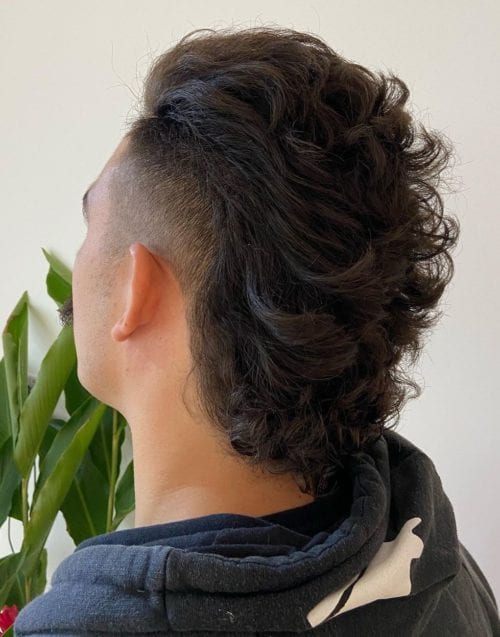 Undercuts are the perfect way to test out your mullet if you’re unsure whether to go all out for it. With shaved sides and the underneath, you can instantly make it appear that your hair will flutter all the way to the end of your neck. If you are going for the mullet look, you should have short hair at the top of your head and long hair at the crown. Just gather the hair and pull it into a bun or ponytail when you are ready to create an entirely new look. 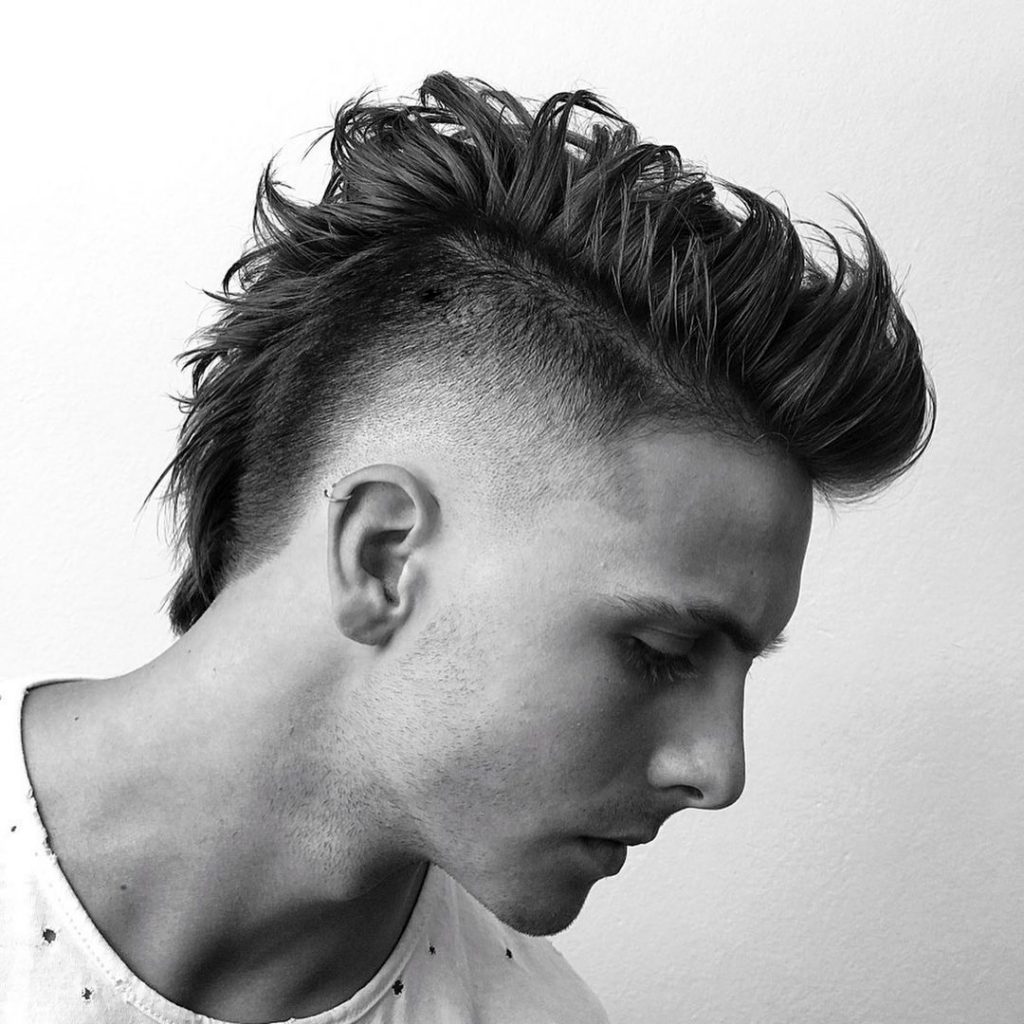 With this hairstyle, you can keep your locks in any length. The top of your head should be a bit shorter than the bottom for an authentic mullet feel – this makes it easier to style. If your hair is straight or short, add some volume to the roots with some gel. If you would prefer a shaggy look, you can work some sea salt spray into it to give it a more natural feel. 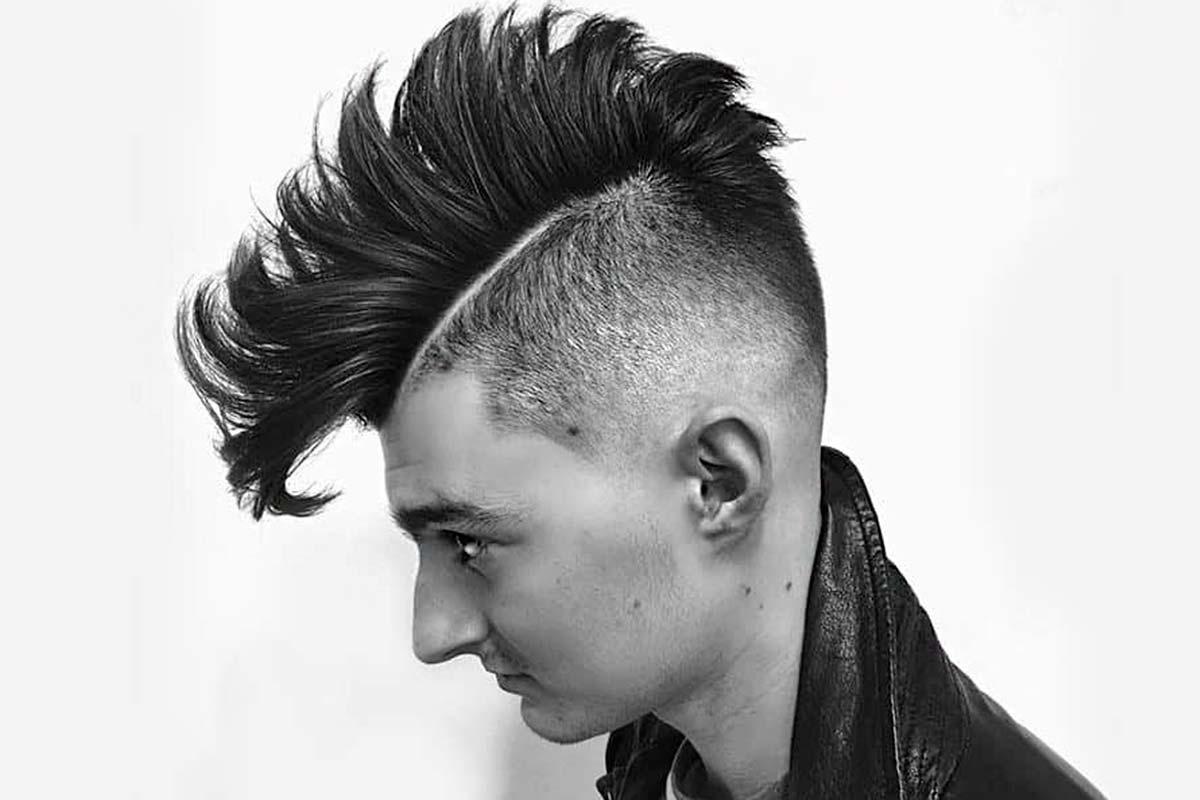 The punk rock era is not over, nor are mullets. Men who don’t fear going all out will love this hairstyle. Maintain a skinhead style by keeping the top of your head hair close to your skin. To spike them up, however, leave the tips a little longer at the crown so you can leave the tips a little longer. Regardless of length, this look looks great when you keep your locks as short as possible above the ears. After your gig or trip to the pub, you’re set for the next one. 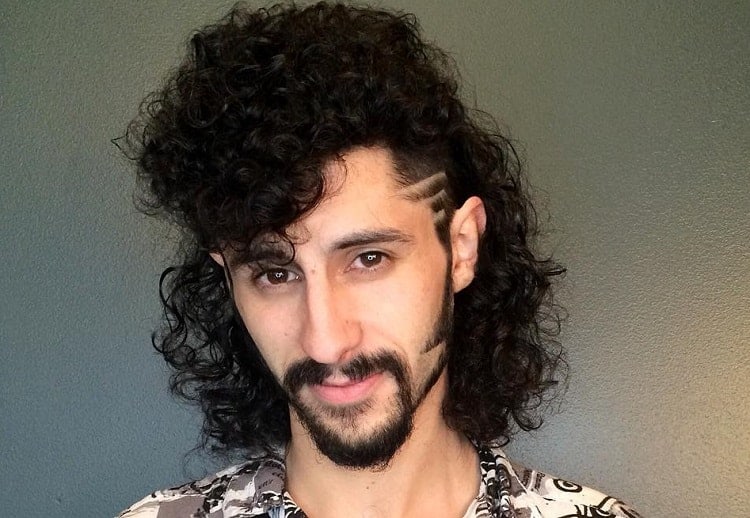 It’s very important to keep your curls intact for the long curly mullet. Make your curls more defined with creams or pomades that define your curls. The rest of your hair should also be kept short to emphasize this mullet’s contrast. With the long curly mullet, you can show off your curls without having them grow out everywhere, which can look chaotic and be difficult to maintain, especially in the summer. Combine the style with a suit and statement shades to keep it from looking too retro. 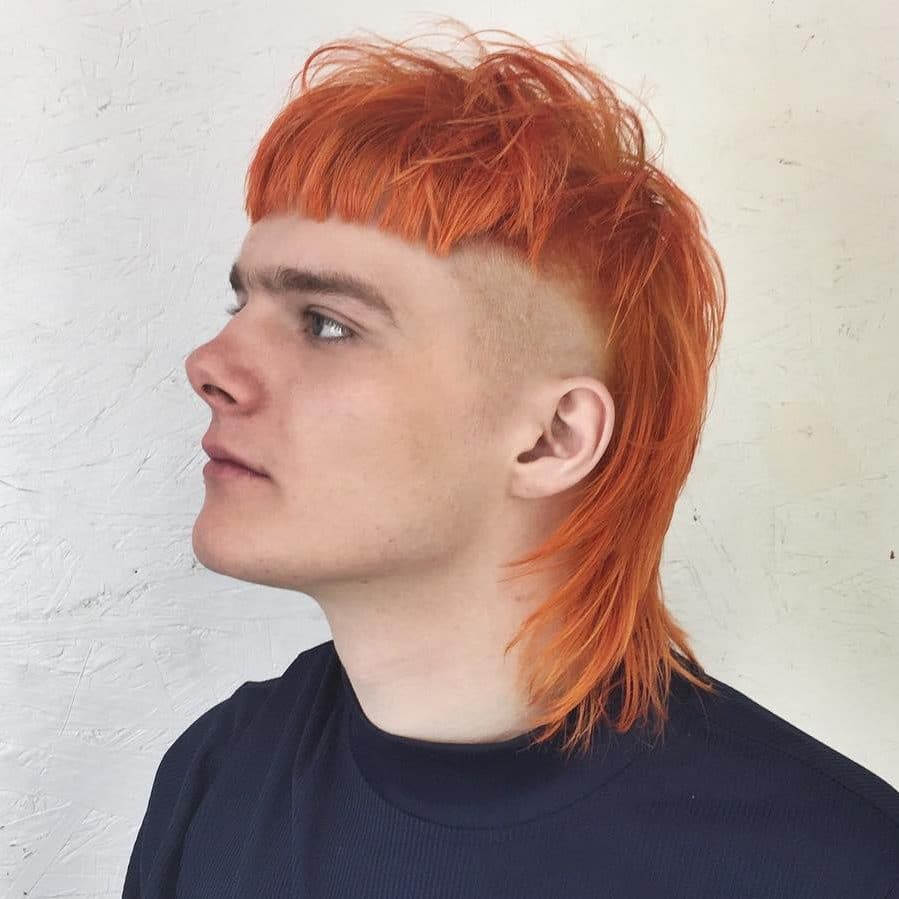 Adding statement bangs to a stylish mullet will give it an editorial feel. Futuristic looks are achieved with a thick blunt fringe that runs straight across. They are great for oval faces because they emphasize the disconnection between the front and back. Keeping the front section of the hair loose and unstyled allows this look to stand out, so blow-dried bangs can be kept smooth and straight, but the back should be left loose and unstyled. 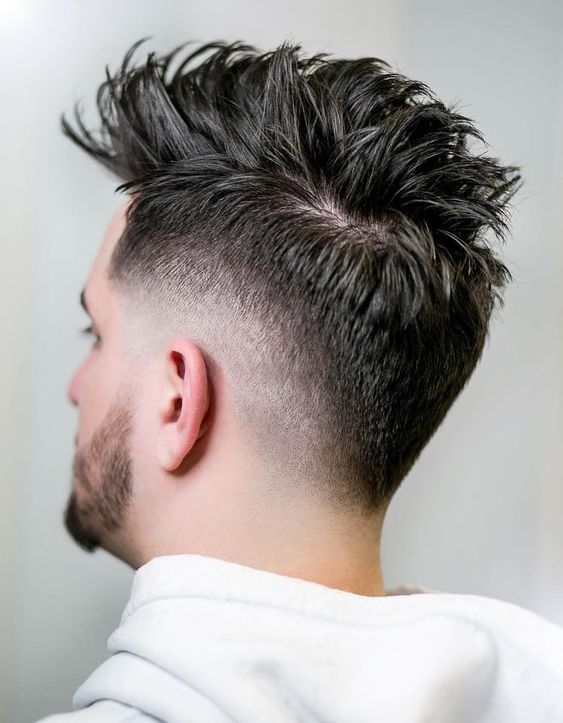 Men’s haircuts are currently dominated by two exciting hair styles: the drop fade and the mullet. Drop fades create the effect of your faded part of your cut dropping down behind your ear. If you prefer long hair, you can keep it, but adding a mullet will give the haircut a layer of attitude. Drop fade mullets combine both length and tapered style for an ideal look. The cutting edge cut is not for the faint of heart, but it is one of the most cutting edge cuts available today. 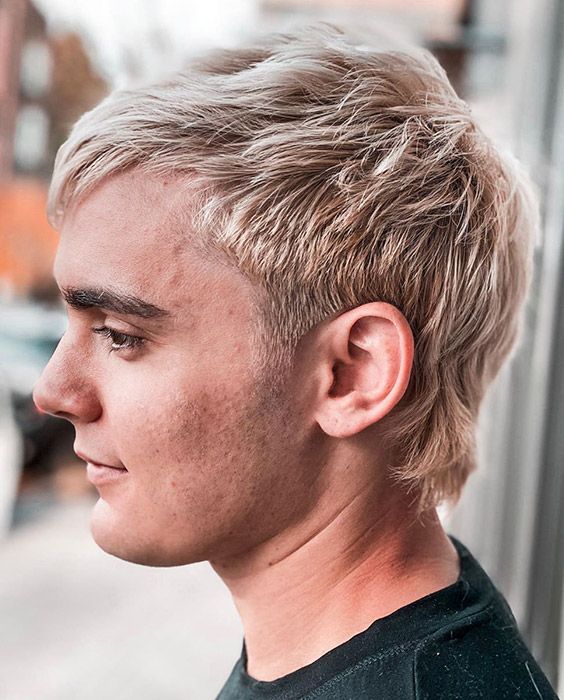 Style like this can be worn anywhere. The style is a more contemporary interpretation of that made famous by eshays of the 1990s, British chavs, and the Australian rap and drill scene. Hair on the top should be cut significantly shorter than the hair on the back, but it can be kept smooth or shaggy until you reach your ears. Next, let the long locks hit the middle of the neck. If you’ve got a French crop on the face, then go for a fade or a faux hawk on the sides. 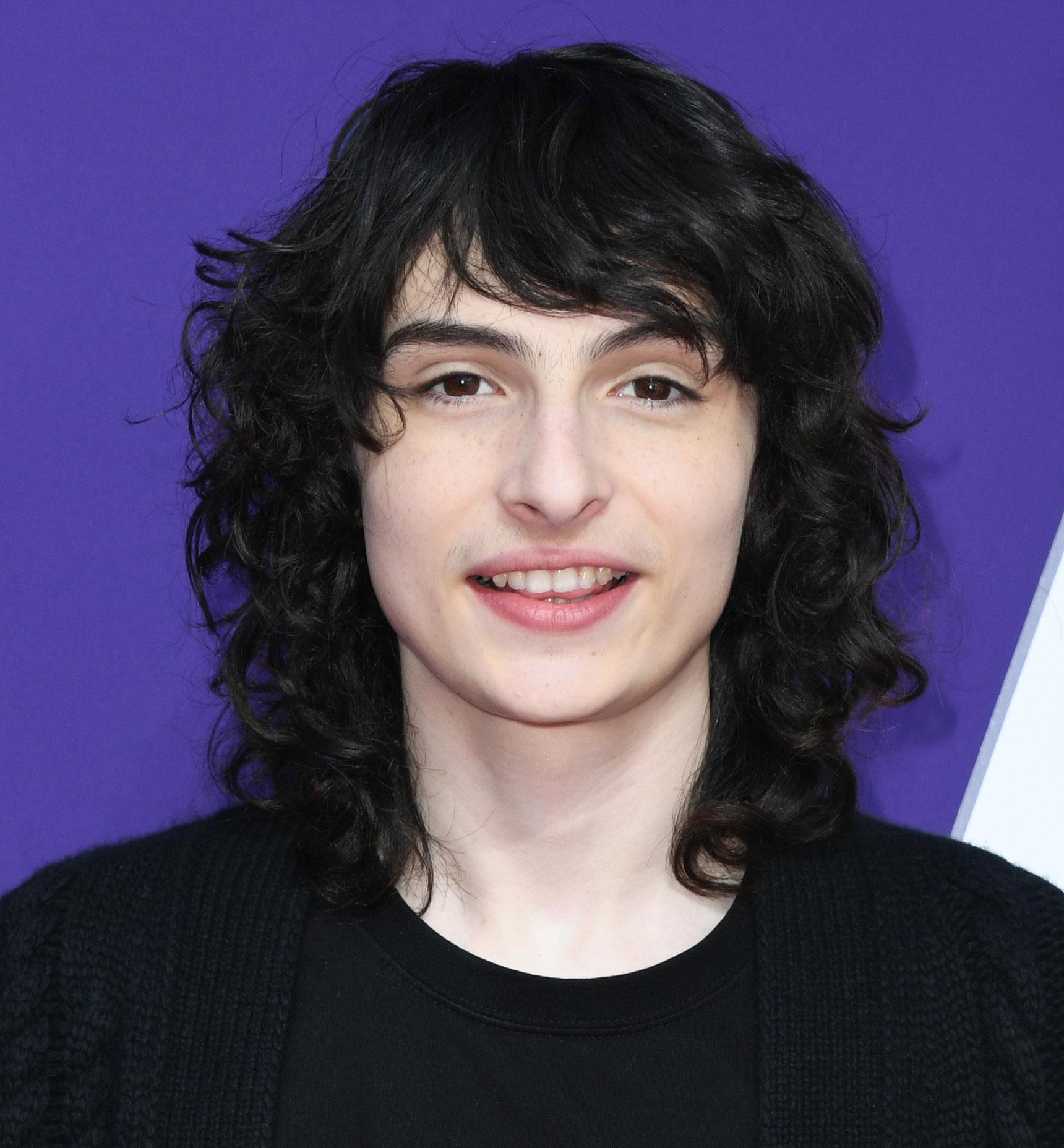 In order to try out this hairstyle in a more understated way, try the modern mullet. A mullet might not be for everyone, so if you want a less noticeable version that’s office-friendly, this is the cut for you. Modern mullets don’t have the abrupt transition between a short front and a long back section. A more soft and graduated style is used. When you have naturally thick, wavy hair, it is a flattering look; your tresses will be visible but not out of control. 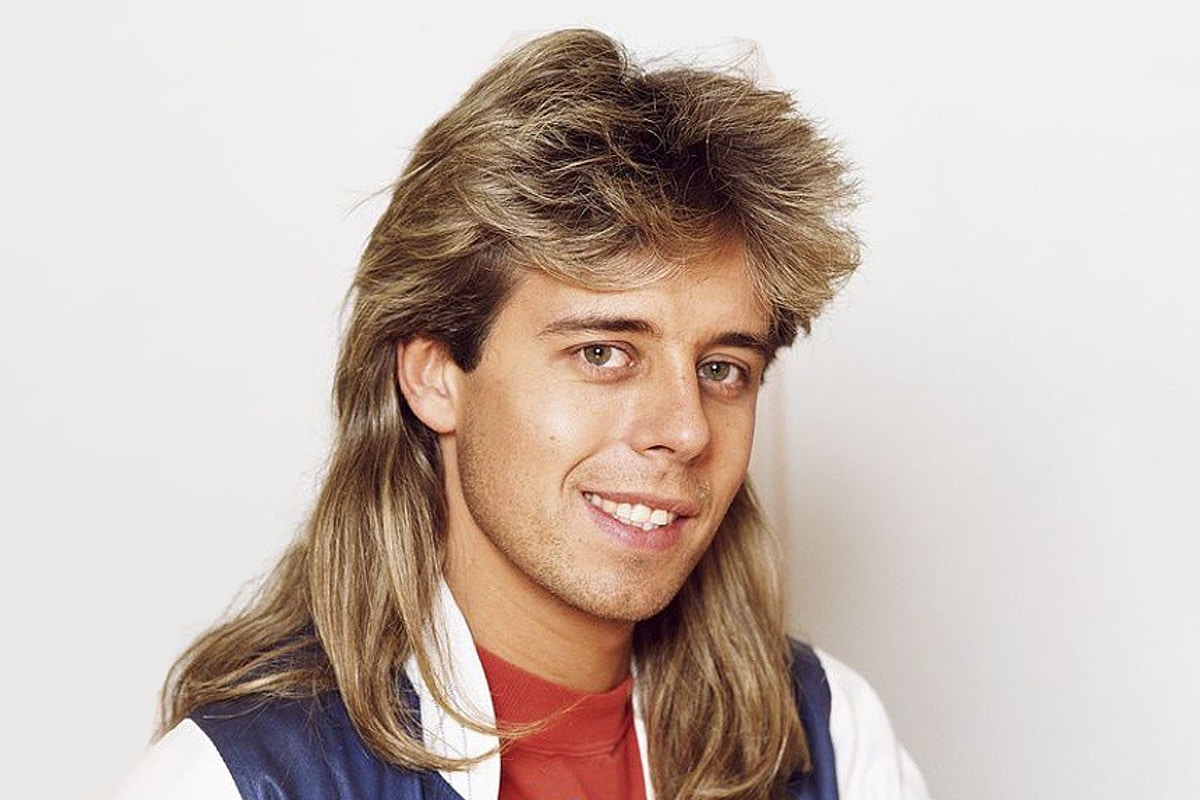 In today’s fashion world, vintage mullets are in. Hair back then had to be fluffy and full of volume – extra points if it was behind the ears. The most famous adaptations include those by Billy Ray Cyrus and Rob Lowe. In the modern world, you can achieve this hairstyle by maintaining the opposite extremes of length, while adding a modern twist. Gel the tips of your hair and style a quiff or spikes to update your volume. 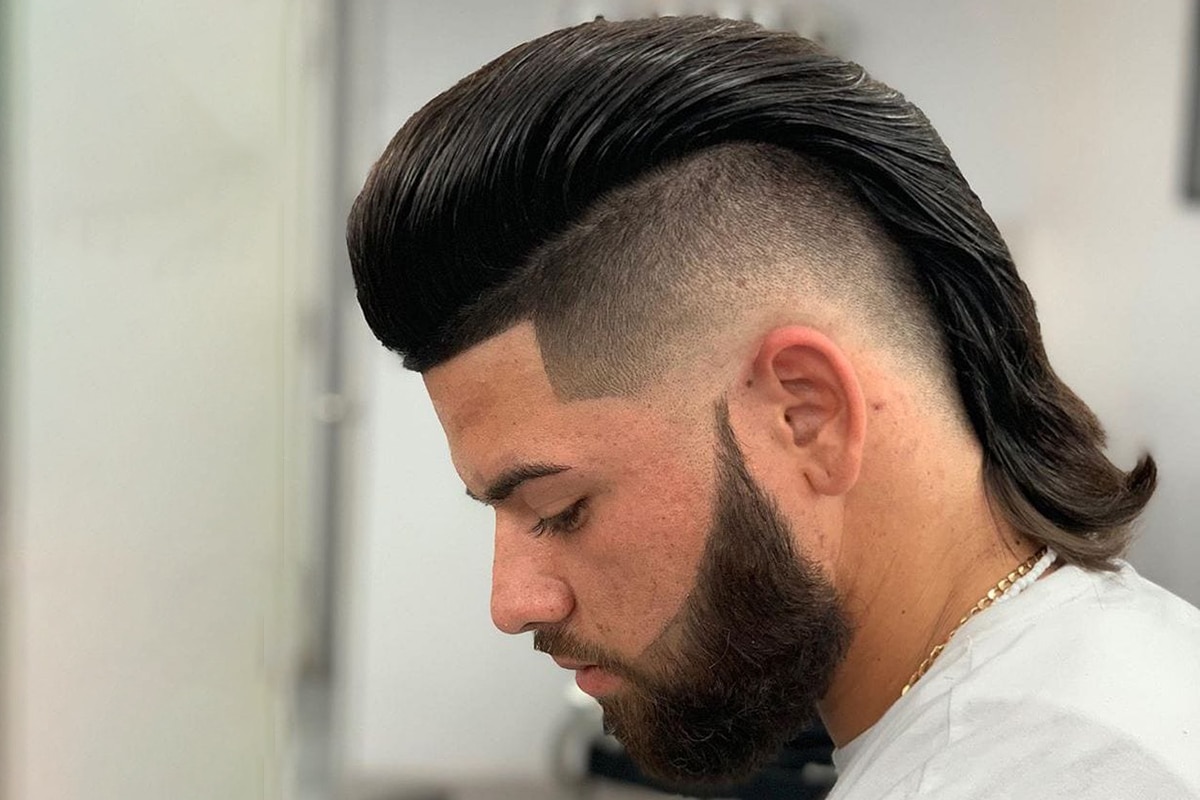 The style is known for its polished appearance, which is perfect for formal occasions. However, it gets a whole new identity when combined with a mullet. With sharp angles and an endless attitude, the skin fade mullet is rebellious and edgy. To achieve the geometric features of this look, thick hair is essential, as the hair must have natural volume. The lean and mean cut incorporates a streetwear aesthetic. 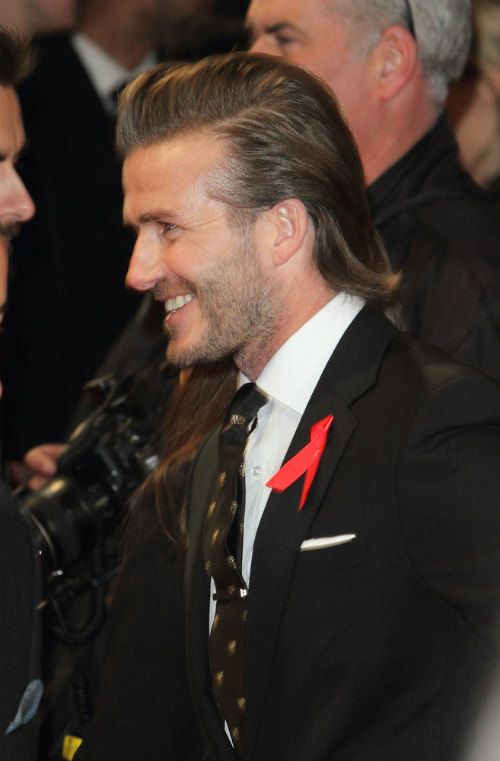 When it comes to smooth hairstyles, nothing beats a slicked-back look, but if you really want to look on top, try a mullet. People with long hair over the entirety of their head but shorter sides and cascading hair towards the neck prefer this style. Identified by its sleek silhouette, this hairstyle can be easily replicated. From the top of your forehead, work your way backward and down the nape of your neck with a brush and products that boost volume. To keep the style in place, spray some hairspray after you’ve finished covering the entire area. 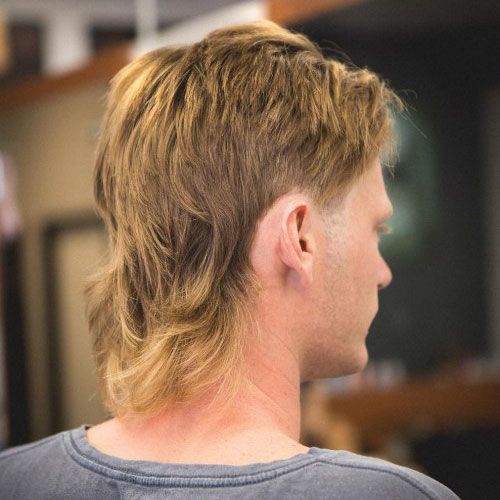 In terms of mullets, the long, straight variety is the most recognizable. If you’re looking for a replica that’s faithful to the style of the 1980s, here it is. A long, straight mullet may be polarizing but it is also flattering and low-maintenance. Attempt wax for texture, lift, and movement on the short front section, then let the long back section hang loose and unstyled. Thin and fine hair types are both suitable for this style. 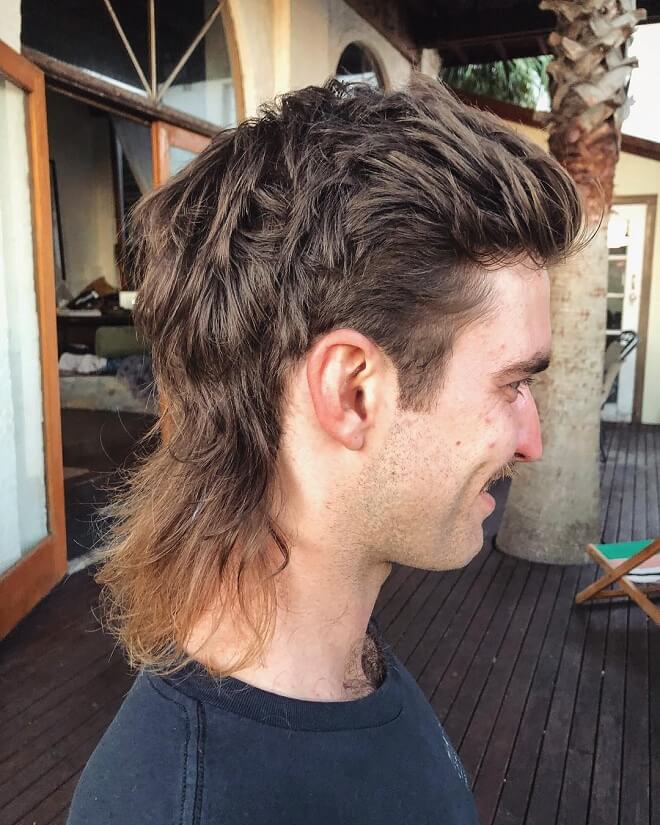 A sophisticated hairstyle with an edgy twist, it might not be suitable for everyone. You will want to keep the hair from the ears upwards significantly shorter than the hair at the back, just like a traditional mullet. This hairstyle differs from the others, however, in that it has buzzed temples. It is possible to choose from several different lengths, including a high fade, a taper, or a temp, but a low fade would be a more stylish option.

Over the past few years, dazzling blonde hair has been a popular trend for Hollywood A-listers, and it doesn’t seem to be slowing down. If you’re considering bleached hair, a mullet is just as appealing. Especially when worn with a suit, the two create a mod revival-esque vibe. Using hydrating products to keep your mullet healthy is important since going platinum blond can cause your hair to become dry and brittle.

Half Up Half Down Mullet 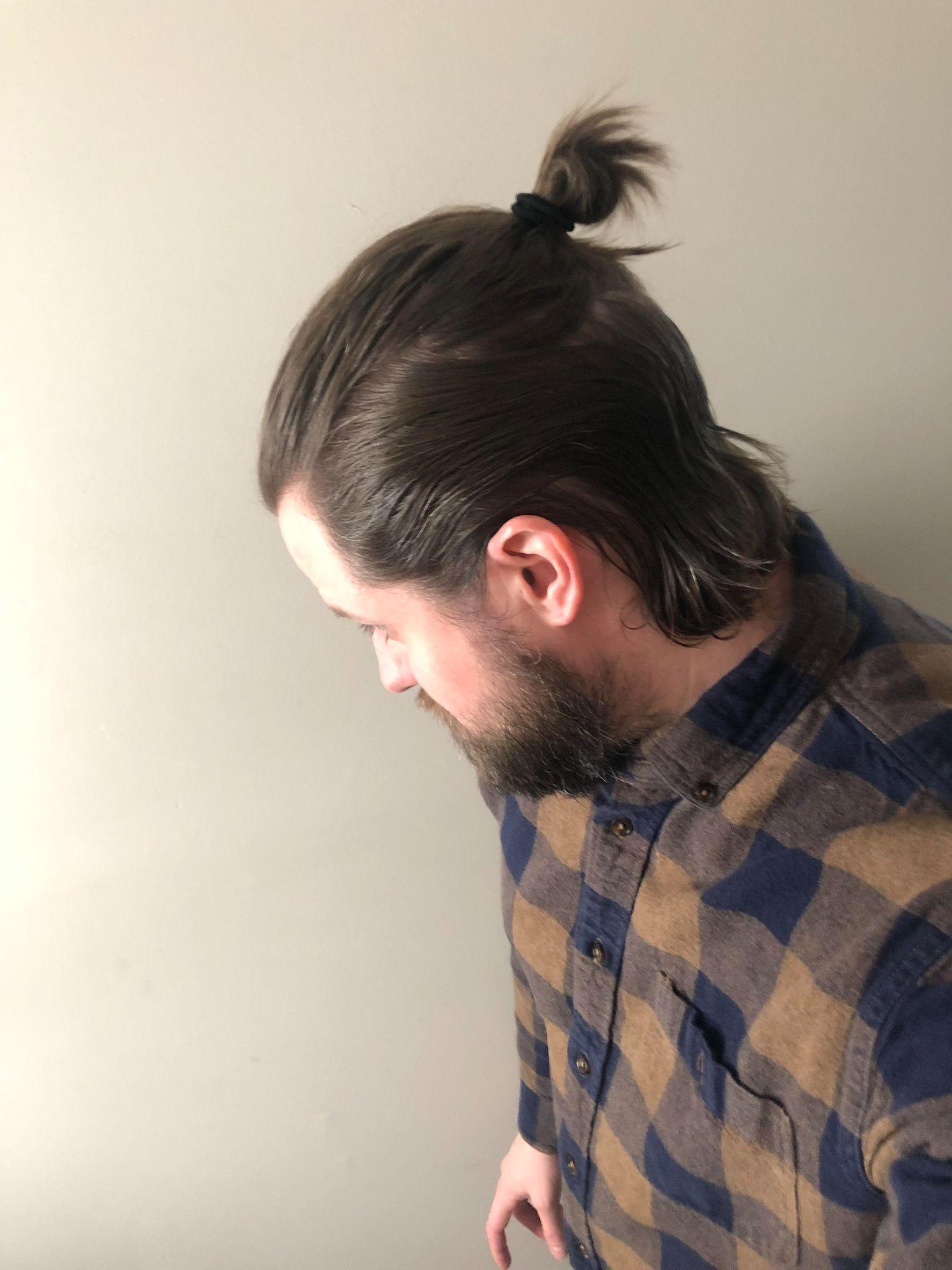 It combines both work and play perfectly for the man on the move. Long hair will look best with this style, even if the front or top are shaved. Tie the tendrils from your crown high or low according to your preference. Whether you’re on your way to a boardroom meeting or spending time with friends, this is a great option. It works in all situations and keeps you looking trim. 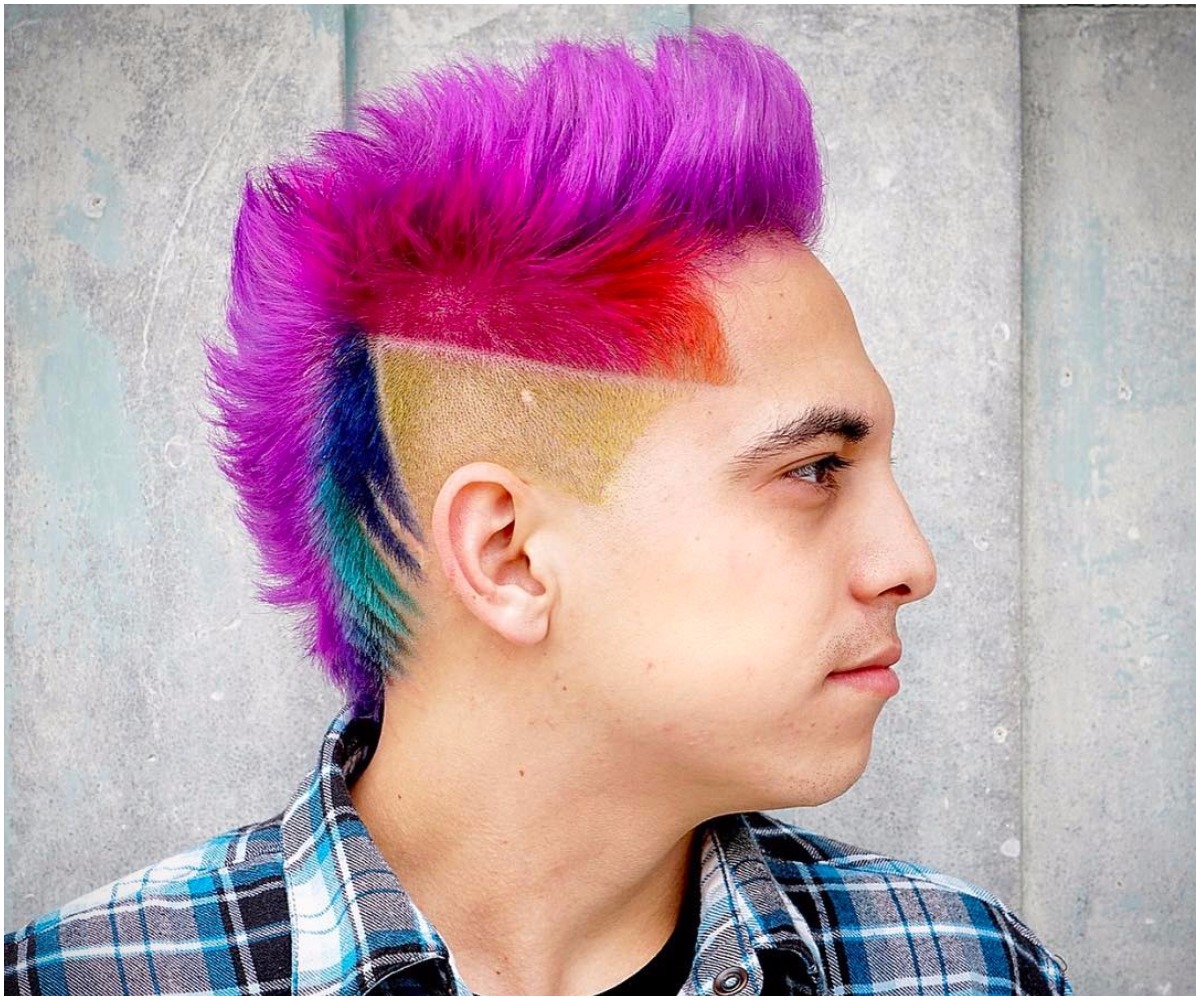 Mullets in pop colors like acid green, pink, and turquoise are futuristic. Despite its punk-like edge, the cut is best styled spiky. Fashion fans who aren’t afraid of being bold will enjoy the pop color mullet, which is sharp and fresh but also borders on cartoony. When you rock this look, you’ll be the talk of the town. Combine it with an all-black outfit for a striking effect, or try head-to-toe color for a daring look

A modernized version of the mullet will be seen in 2021. Embrace natural texture, inject fun colors, and rock more structured yet alternative shapes this time around. In comparison to the 80s, hair is kept longer on the top, and the length at the back isn’t as extreme. The result is a more rounded yet still distinctive mullet.